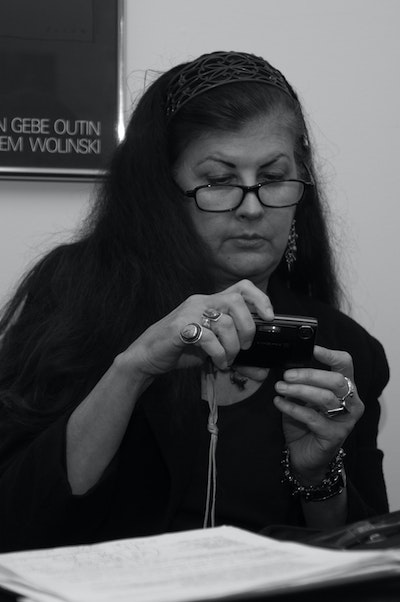 Phoebe Bosché was raised in Long Beach, California, and studied political science at Cal State Los Angles. She is a cultural activist, and has been managing editor of The Raven Chronicles literary organization/Raven Chronicles Press since 1991. Beginning in 1984, she organized literary events and readings in the Pacific Northwest. In 1985, she co-founded, along with poet Roberto Valenza, “Alternative to Loud Boats,” a literary and musical festival which ran for ten years in various venues in Seattle. In the mid-1980s to early 1990s, she was co-editor of Swale Magazine (with Valenza) and SkyViews, a monthly literary publication of Red Sky Poetry Theater. Her spoken word poems appear in various publications, including the anthology Durable Breath, Contemporary Native American Poetry, Salmon Run Publishing Co., Anchorage, Alaska, and Open Sky Magazine. She is a full-time editor and book designer. Her favorite poet is Archy, the cockroach, whose muse is Mehitabel, the alley cat.